Recently, we had the pleasure of dining at “Be Our Guest” at the Walt Disney World Resort. This is the “Beauty and the Beast” themed restaurant located towards the back of the Magic Kingdom park and looks like a giant enchanted castle. Reservations are currently on a 6-month waiting list, and with the release of the new live action “Beauty and the Beast” movie, I can only imagine that reservations will take even longer. They are open for breakfast, lunch and dinner and reservations are required for any meal time.

We were lucky enough to reserve dinner reservations and when we arrived we were escorted in through giant doors, and stepped into what felt like a real castle. 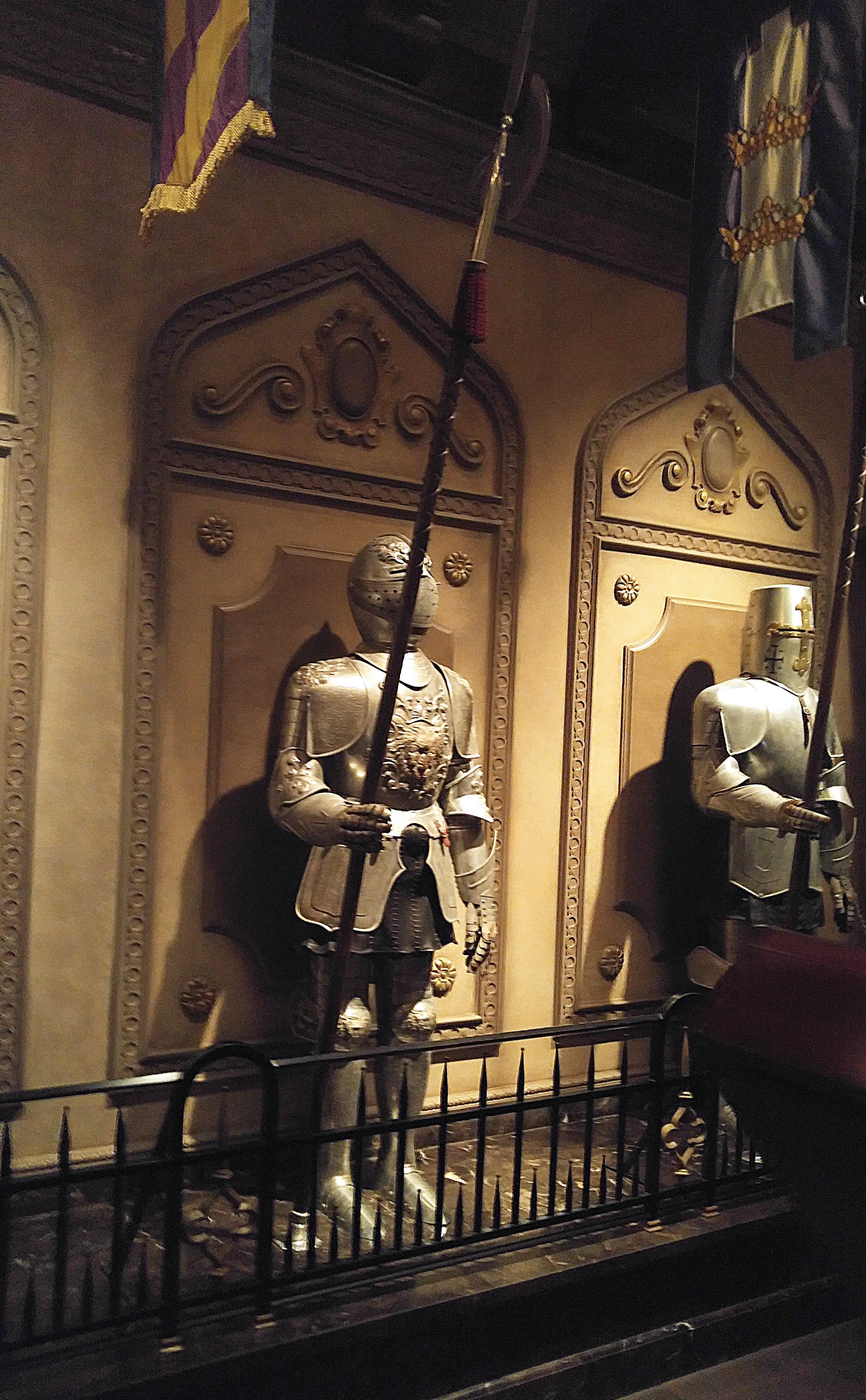 The main dining room was made to look exactly like the ballroom where Bell and the Beast danced in the movie. It was exactly as it appeared in the movie, with high balconies, beautiful flooring and floor to ceiling windows at the end of the room. 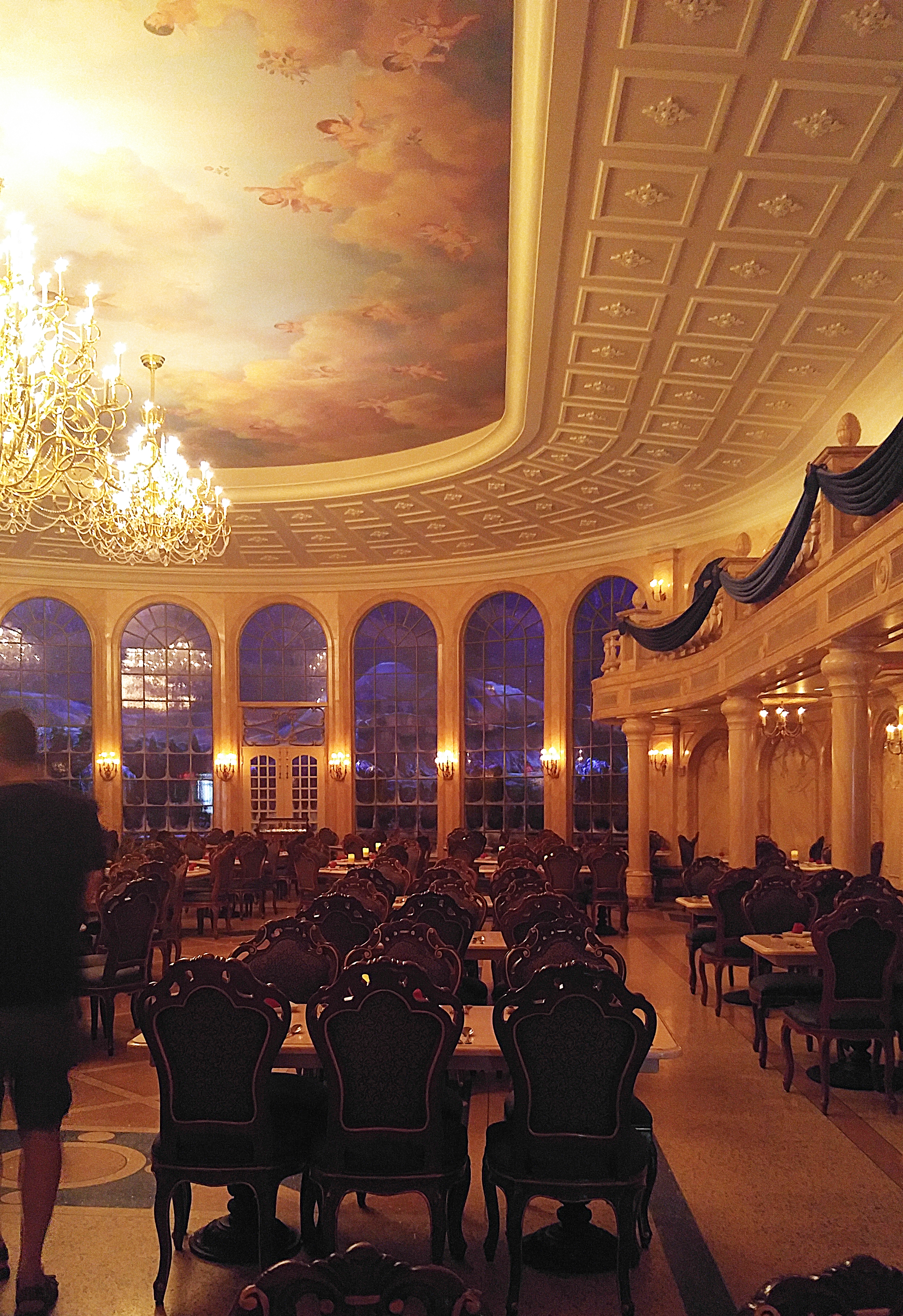 We were seated next to some large snowy windows with a view of the grounds, and a beautiful gentle snowfall falling outside the window. Occasionally, you could hear the rumbling of a distant storm. 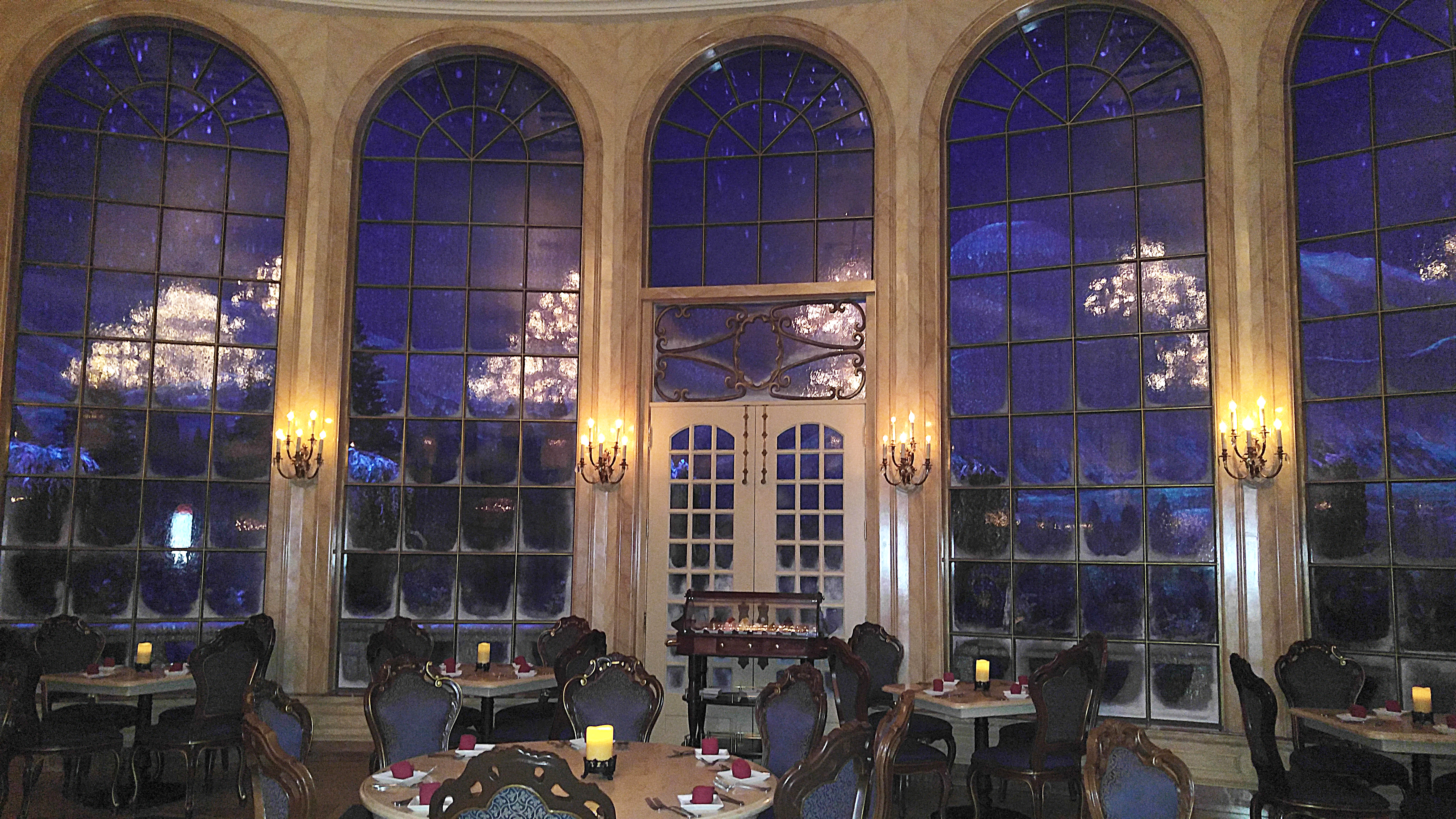 On our place setting was a napkin folded into a beautiful rose, almost too pretty to unfold and use. 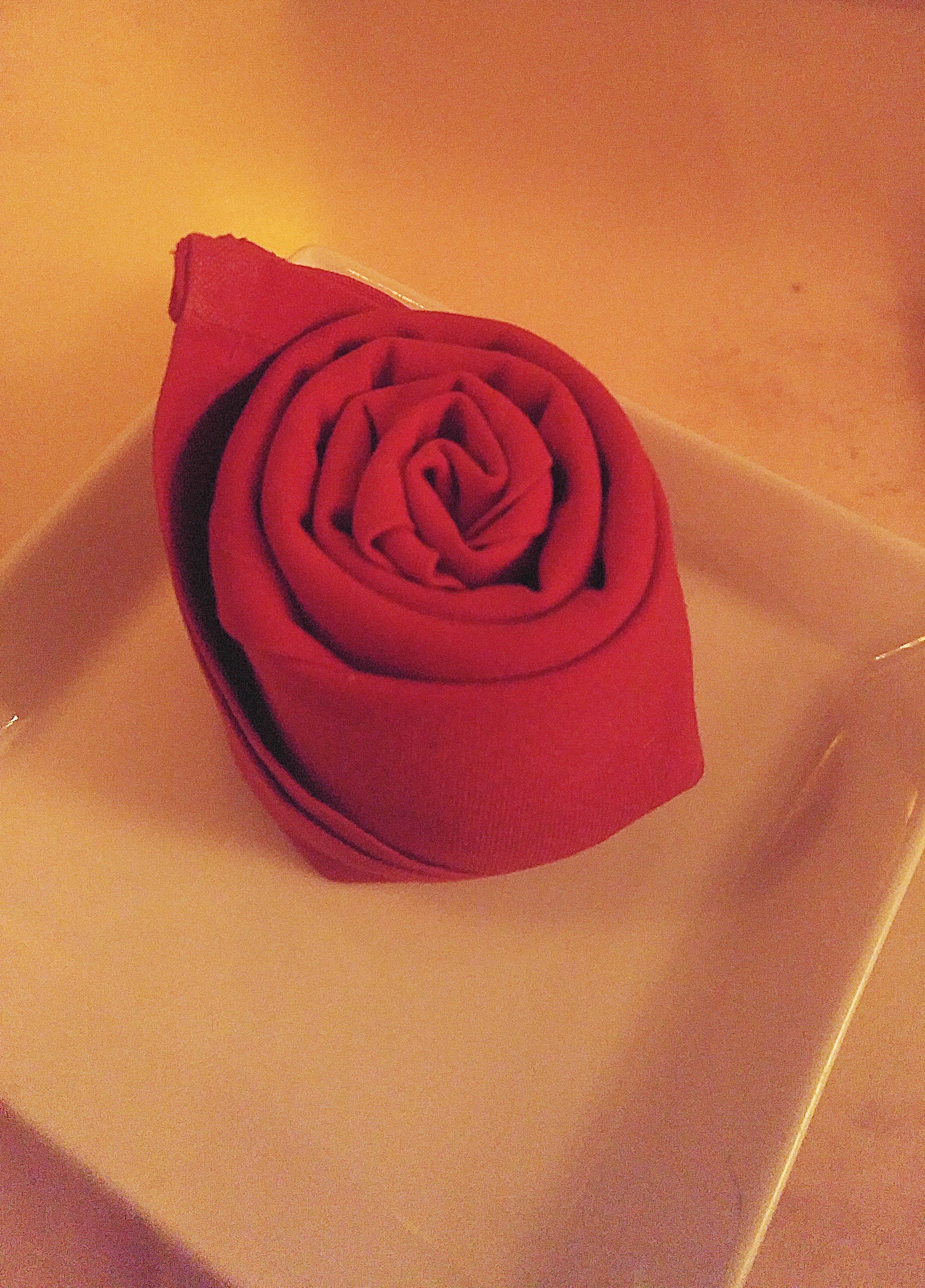 The menu is priced at what Disney considers an average price ranging from $15 – $34.99 per entrée. I ordered the French onion soup for an appetizer, and for dinner I ordered the Braised Beef which had been slow cooked in red wine for several hours and served with fresh asparagus, caramelized onions and crispy potato curls. 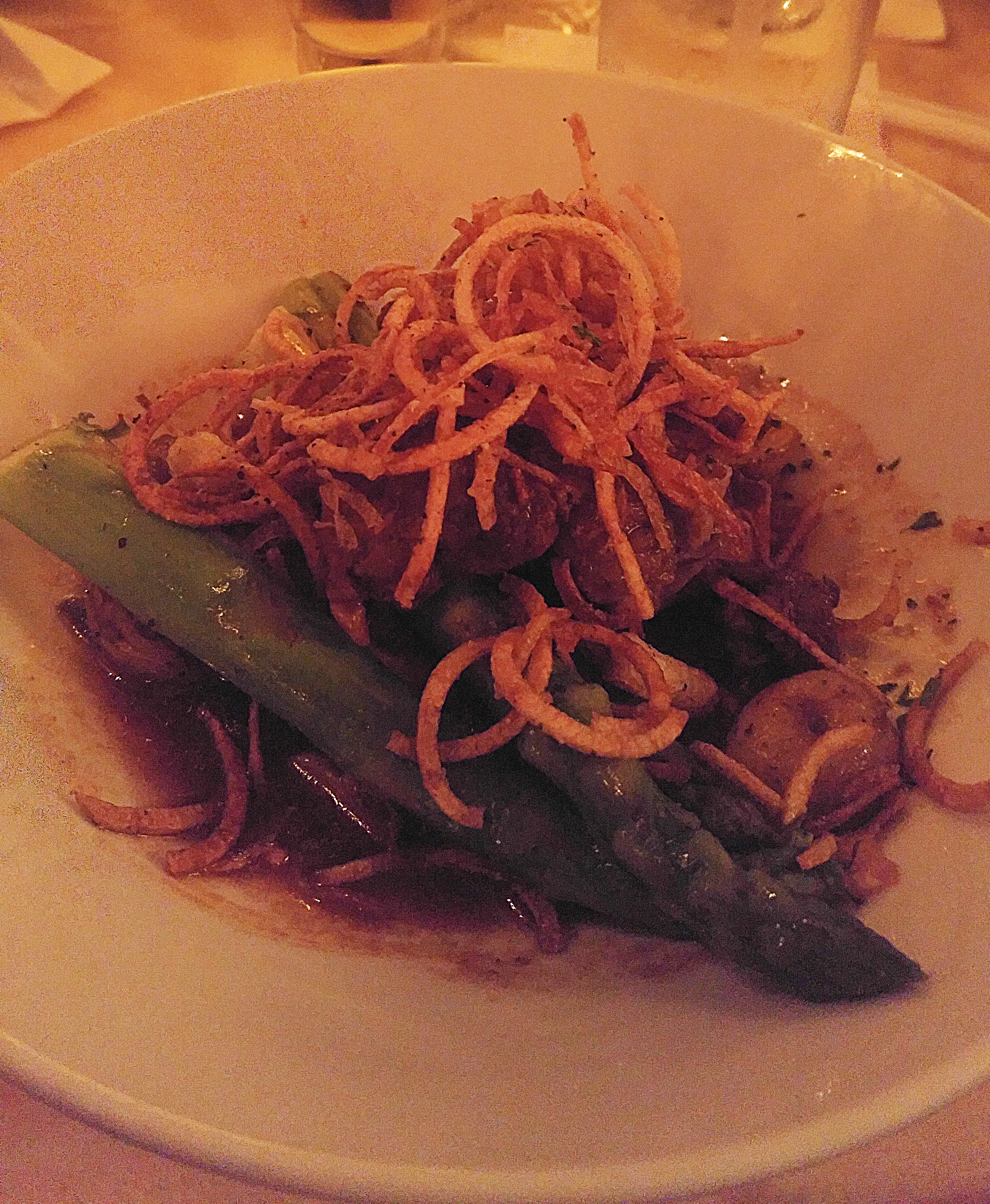 Everything was delicious. Of course, you must save room for dessert and try the famous “Grey Stuff”, which by the was WAS delicious. 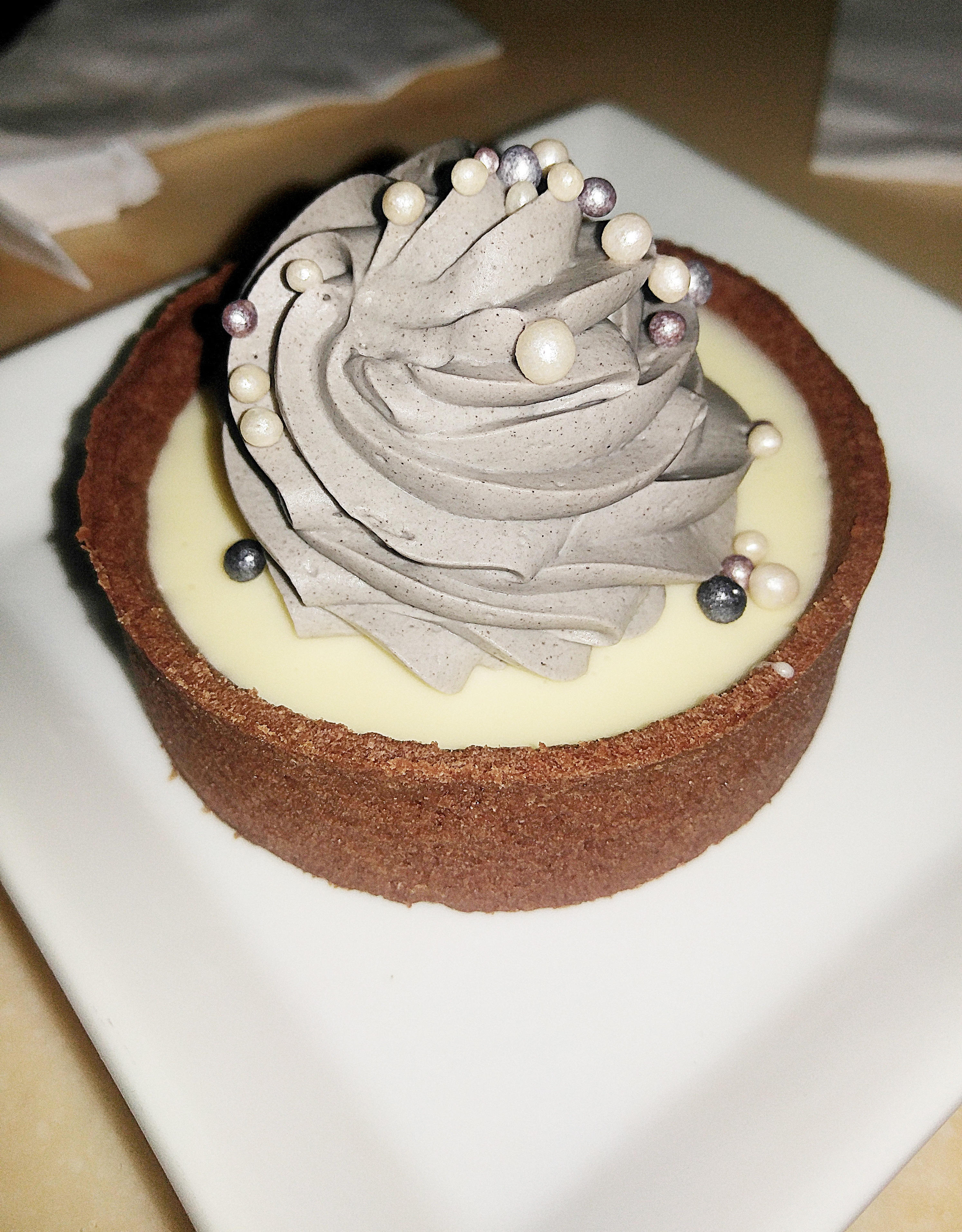 It was like a chocolate graham cracker crust shell, with a layer of crème and then topped by the “grey stuff” which tasted like a fluffy cookies and cream mousse. It was topped by tiny decorative pearls that tasted like Rice Krispies. Yummy!

From time to time “The Beast” was announced as our host for the evening and would come marching through the dining hall with thunderous applause. He is about 8 ft. tall, and the restaurant is the only place that you will see him, as he does not venture out of his castle. He does host a meet and greet after dinner, and you can’t help but feel a little child-like when you meet him, even though he has very kind big blue eyes. 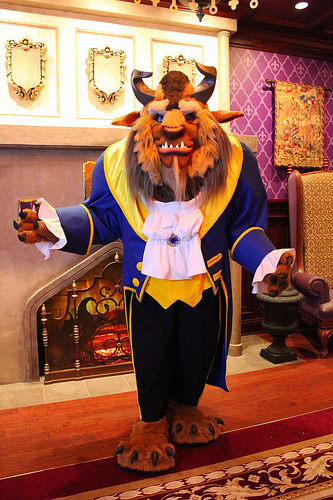 With Disney, you never know when something magical can happen. It just happened that we were dining on the opening night of the new “Beauty and the Beast” live action movie. We were pleasantly surprised with an unannounced appearance from a cast member from the new movie, Josh Gad (Also known as the voice of Olaf in “Frozen”). He came and greeted the guests and sang a few rounds of “Be Our Guest” from the movie.

Don’t forget to explore the rest of the castle while you are there, including the room with the enchanted rose. The room looks like it is torn to shreds by the Beast’s powerful claws. Every time a rose petal falls, a picture of the castle Prince transforms into the beast.

The service was excellent, and I cannot say enough kind words about the management and staff. Disney has once again done a great job making imagination come to life! Be sure to make your reservations early in advance, and bring your appetite! Bon appetit!